TRS One, the new trial motorcycle made in Catalonia

Jordi Tarres, sports and R & D director of TRS Motorcycles, announces the signing of 6 times Trial World Champion (outdoor and indoor), Adam Raga, for the next three seasons. This announcement coincides with the introduction of the new trial motorcycle, TRS One, which under the direction of multi-time World Champion Jordi Tarres, begins down the commercial road in this final part of the 2015 season. 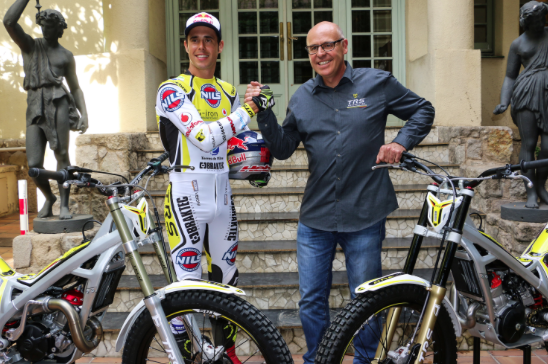 Jordi Tarres: “It is a pleasure to present in a single act our new motorcycle and also who will be the rider beginning next weekend. In reality, we really nurtured this possibility for several months and finally we decided to start our voyage. We have our TRS One finished and ready to compete, and Adam Raga is in a moment of his sporting career in which our projects will fit perfectly, so that today is a great day to go public with this double news.”

Adam Raga: “I am very happy to be part of the TRS project that excited me since Jordi introduced it to me. The agreement we have reached is very positive for everyone, we will work with enthusiasm to start strong with a very motivating program. With Jordi as our leader is for me a guarantee because I know things will be done correctly, but also because I am with someone I know well, as much as he knows me, which is a guarantee that we will always work in the same direction.”
“Signing for TRS is a big step forward. I’ve always said that my current bike is the most competitive at the moment, now I can say that the TRS I’ve had is better in every way, even as a standard model, which also ensures the evolution of the racing version, and therefore constant improvement is assured.” 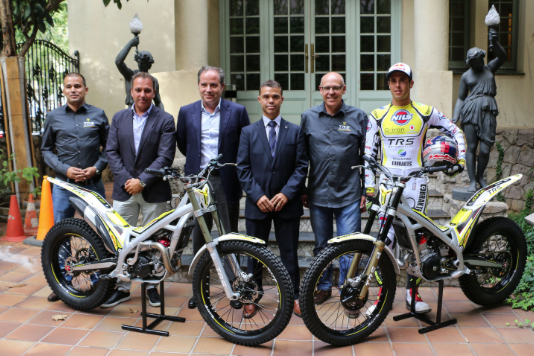 Raga comes to TRS after a tough 2015 season, with enough problems of team structure, but Adam has overcome, finishing admirably and winning the runner-up position in the Trial Outdoor World Championship, which ended yesterday and previously the indoor as well. Furthermore, Adam is the leader in the Spanish National Championship. The aim of TRS is the same as Adam Raga since becoming a trial professional: winning. “With Jordi Tarrés who is leading the project means everything to me – declares Adam – he was my trainer and we were together many years in racing but also in day to day; From him I learned how to work, to train, knowing how to tune the bike … Jordi has created the best bikes that have never been designed and now their latest ride is something that especially motivates me. “

Besides the six world titles (4 indoor and 2 outdoor), Adam was part of the Champion Spanish team in the Trial des Nations for 12 seasons, while adding a total of 7 titles of absolute Champion of Spain.

After the Trial of Nations test in which the binomial Raga-TRS will team up with the other three riders and brands of the Spanish lineup, TRS Motorcycles will participate in the three races remaining to finish the Spanish Trial Championship, in which Adam is the current leader. All to properly prepare for the 2016 season, which begins in Sheffield (UK) on January 9th with the first round of the World Indoor Trial X championship that the team will contest in its entirety, as well as the World and Spanish national outdoor championships.

Besides the TRS and logos Hebo (helmet), Adam Raga will complete the 2015 season with his personal sponsors who helped him carry out this difficult campaign, while having not decided which companies will support the team for the next season.

The participation of Adam Raga with the TRS One is part of a 100% official program for the brand, with the Director of Operations Paul Delgado, and Paco Roldán responsible for the mechanics.

TRS, the return of Jordi Tarrés

The TRS Motorcycles industrial project created in 2013 by the four partners, Jordi Tarrés (technical and sporting director), Ricard Novel (CEO), Marc Arañó (Commercial and Marketing Director) and Josep Borrell. The participation of the businessman Novel brings the financial strength necessary to an innovative industrial project, while Tarrés’ experience in the construction and development of a trial bikes, and the direction of Arañó in the field of trade and international marketing, allows this voyage to begin in a solid and professional manner.

The birth of the TRS One took years to mature. Jordi Tarrés and the technicians have spent many months working on the prototype of the new bike, but it has not been until the completion of the entire market situation and the technical status of the project itself, have they began the start-up, with all the objectives well checked.

TRS will bring to market its first trial model, the TRS One in three displacements (250, 280 and 300cc), and to expand the development of new displacements for 2016. The facility is located in Sant Fruitós de Bages, from which also is managed the R & D.

Although logically the role of Adam Raga will be the leader of the sporting activities, TRS Motorcycles will hold a progressive participation in different countries, which will be linked to the consolidation of the business and the gradual involvement of its importers and collaborators.

The TRS One with rider Adam Raga has an aesthetically daring design with a double cradle chassis in forged aluminum with a liquid-cooled 2-stroke single-cylinder engine of 300cc displacement, with a total weight of 65 kg. 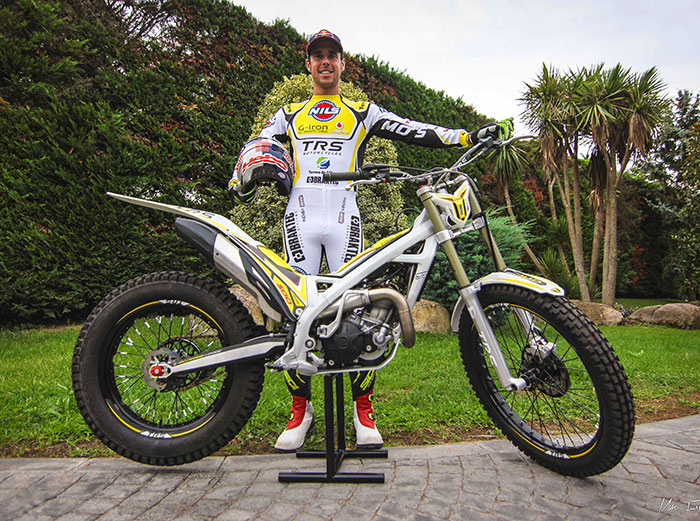 Tarrés-Raga, an association that comes from long ago

The destiny of Jordi Tarrés and Adam Raga being rejoined in what actually will be a new relationship marked by a long-standing close collaboration between the athletes’ lives. It was Tarrés who gave Raga his first big break, in those times with Gas Gas. Jordi advised and showed Adam some of the secrets that now have been well learned by this natural rider from Ulldecona. Adam lived for 10 years in Rellinars along-side the Champion Tarrés, training and racing, and growing day by day, to become a World Champion rider.

Interestingly, it was in the Museu Colet (Colet Museum) where some of the Gas Gas programs and presentations were held, in which Tarres acted as team manager and Adam was first presented as a figure of a team that led the World Championship of trial for several years.

In 1997, Adam Raga was a junior rider that began to emerge in trial. One day, Narcis Casas (one of the creators of Gas Gas) and Jordi Tarrés saw him train and appreciated the boy’s good manners, so then a year later, when Tarrés withdrew from the competition and went on to lead the team at GasGas, Raga was signed and went to live in Rellinars, under the tutelage of the multiple world champion for almost a decade.

Adam Raga: “It was an exceptional start, since 1999 the work under the direction of Jordi was enormous. I had been self-taught in my early years, so to have a figure like Tarrés working with me, a person I admired and still do, it brought me so much strength that I was learning, and my riding ability was growing and improving until I could hobnob with the Elite riders of trial. The strict way of working Jordi influenced upon me has remained with me throughout the years, I have always been doing what I learned at his side.”

Adam Raga Sans was born on April 6, 1982 in Ulldecona (Tarragona) and currently lives in Taradell (Barcelona). The first trial in which he participated was at the age of 6 years. He considers his most important victory as the Junior Championship of Spain in 1997 and his favorite recollection is his first win in the 2003 Indoor World Championship.

His résumé is dotted with many important successes, emphasizing as absolute champion with outdoor World titles in 2005 and 2006 and four consecutive indoor World titles from 2003 to 2006. With the Spanish Trial de Nations team, no fewer than 12 crowns, that of 2001, and from 2004 to 2014 consecutive. In the indoor Trial de Nations version, on the national team, Raga has won the title consecutively between 2003 and 2008.